Why don't we have altar calls? 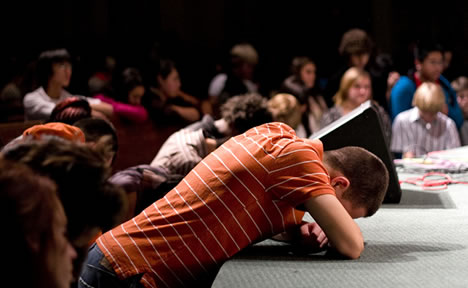 Over the past century it has been a practice in some American churches to follow the sermon with an “altar call”—an appeal for people to come to the front of the auditorium, pray a prayer, and receive Christ as Lord and Savior. In some churches, this may happen over a period of several minutes as the congregation sings and rejoices with each new person who comes forward.

What About Neighborhood Church?

At Neighborhood Church, it is our heartfelt desire and prayer that God would be at work before, during, and after our worship services to convict people of sin, to open eyes to truth, to turn hearts towards Him, and to cause people to embrace the life-giving gospel of salvation that is only possible through Jesus Christ.

So, Why Are We Cautious About Traditional Altar Calls?

While we don't necessarily think that those who have altar calls at the end of their worship services are wrong, there are several reasons why we are cautious about this practice:

Ultimately we rely on the power of the Holy Spirit to draw sinners to Jesus through the Gospel whenever and wherever it is proclaimed. Please join us in praying that God would save many people both inside and outside of our worship services for His glory and eternal praise.